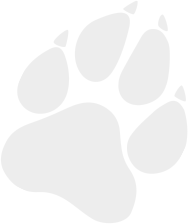 Healing Hounds – About Us

Healing Hounds – About Us

To provide playful interaction between certified therapy dogs and first responders for the purpose of reducing job related stress by capturing the health and wellness benefits of the human-animal bond.

We partner with first responder agencies and counseling services to help reduce the stress, anxiety, fatigue, and emotional unrest that first responders experience as part of their job. Our specially-trained dogs are loving and affectionate and offer first responders an opportunity to connect in a healthy and safe way. 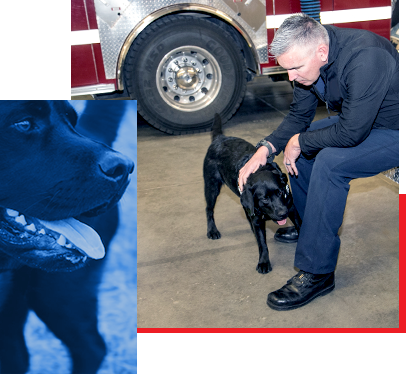 Nancy Brandt is a former Criminal Investigator for the State of Colorado as well as a former civilian employee for the Denver Police Department and Denver County Court. Prior to that Nancy spent many years working as a Paralegal, and part-time as a legislative aide. 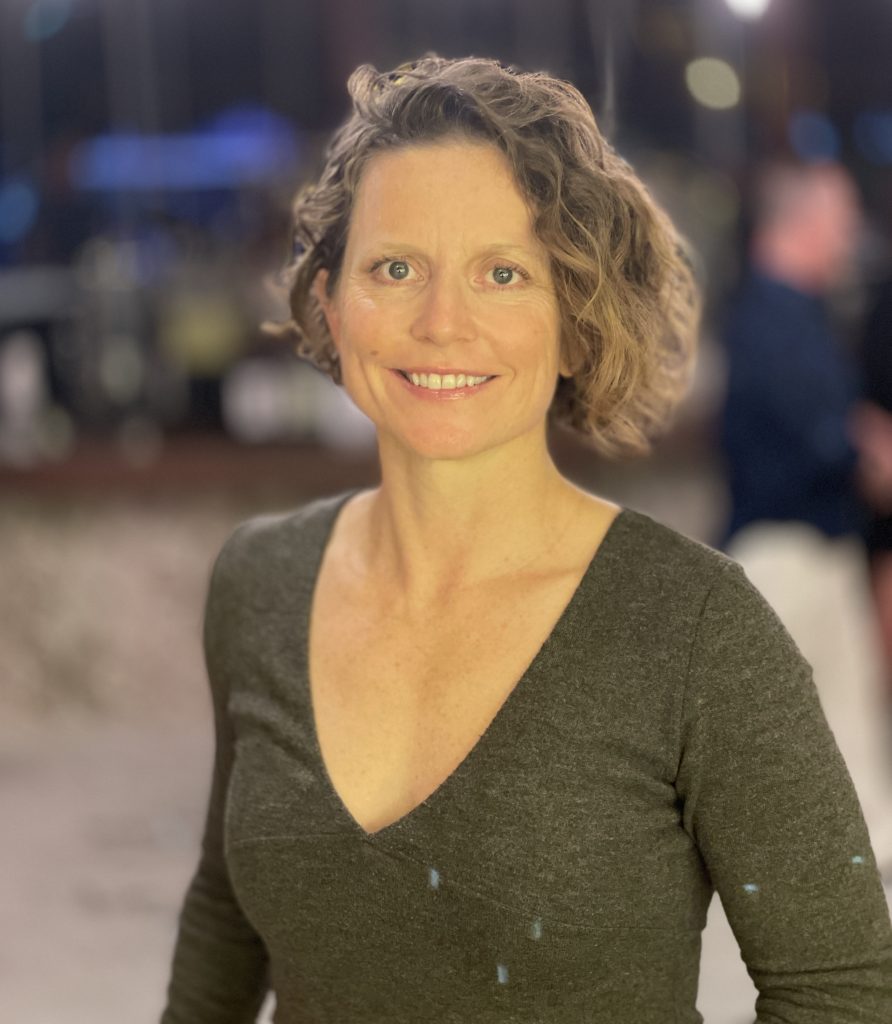 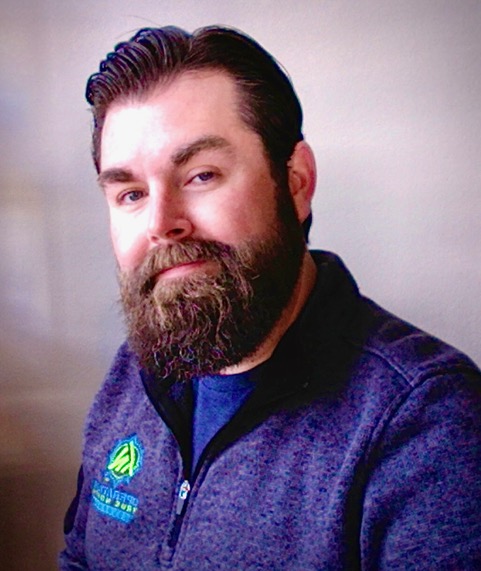 Josh is currently the co-founder and CEO of Operation True North Colorado, a mental health company explicitly designed for the military, first responders, and their families. 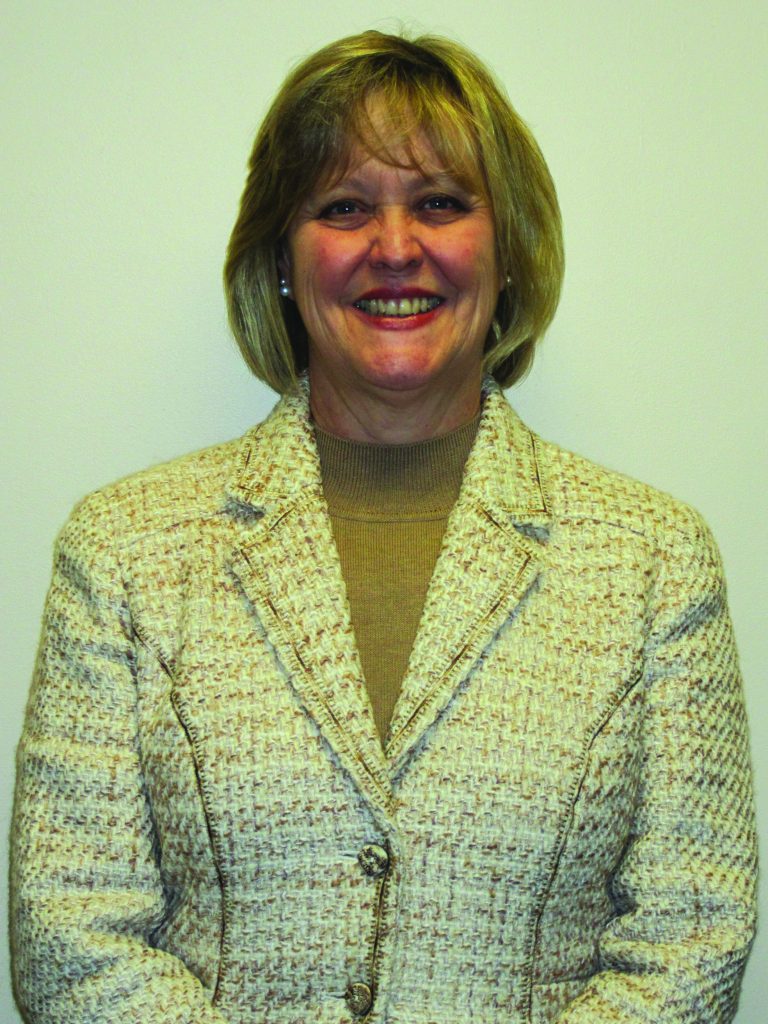 Valerie Robson has been active in the field of Human Services and Aging for over 40 years.
She holds an undergraduate degree from Colorado State University in Psychology and Cultural Anthropology and a Masters degree from the University of Kansas in Social Work Administration and Gerontology. 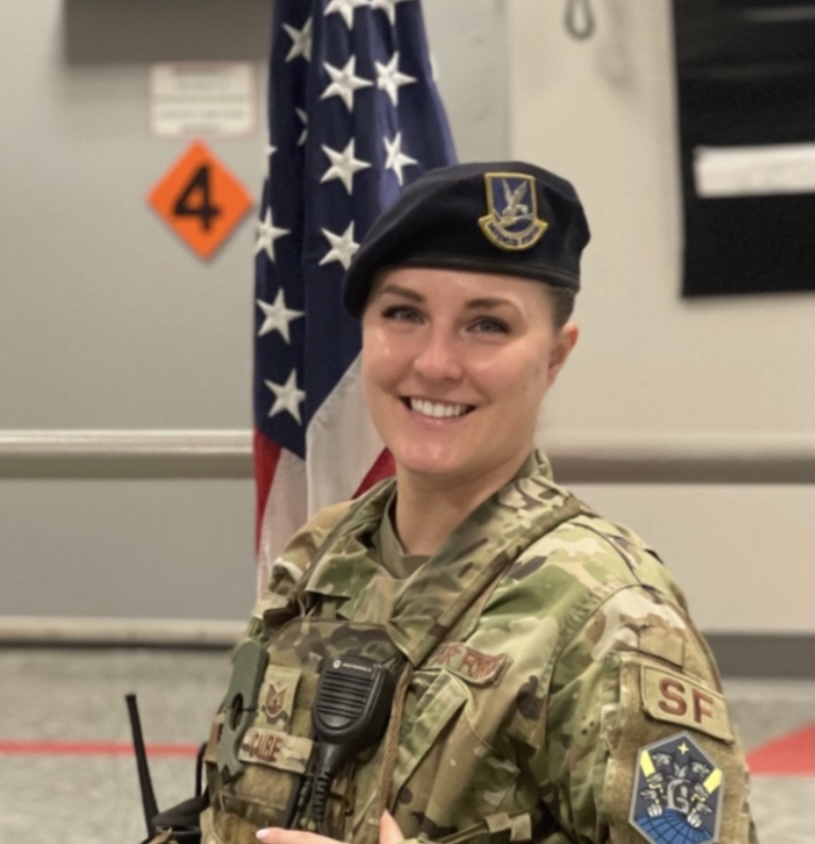 Amy Cure is a Security Forces Tech Sergeant in the USAF and is stationed at Peterson Space Force Base in Colorado Springs. Amy is co-director of a first responders support program at Peterson SFB called Tough Talks, in which she has implemented the Healing Hounds Inc., team to assist with this program. 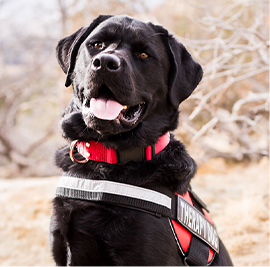 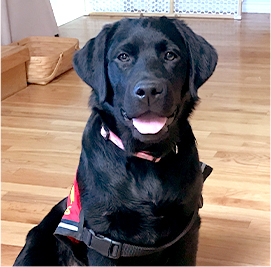 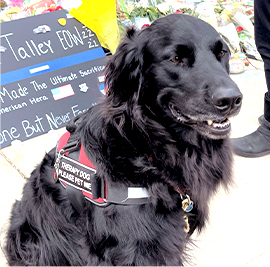 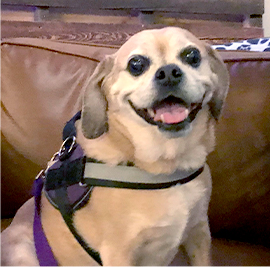 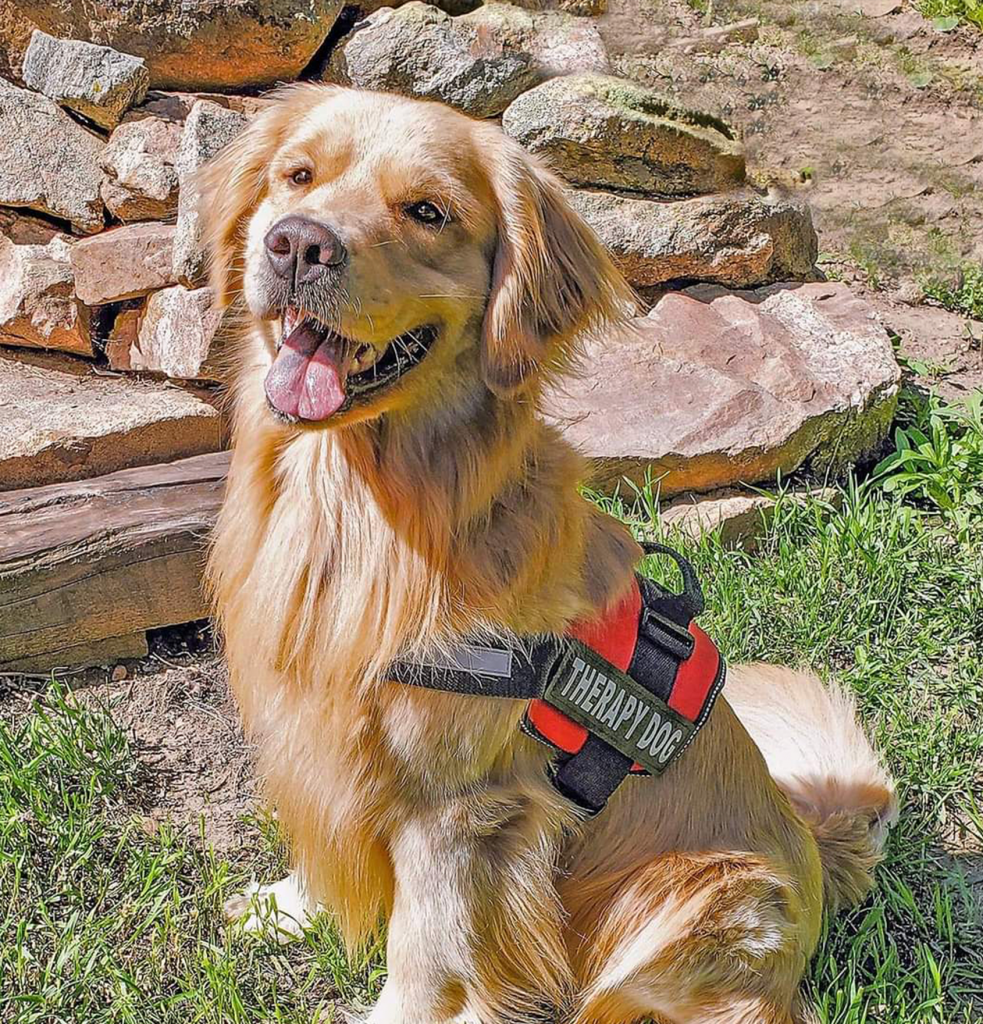 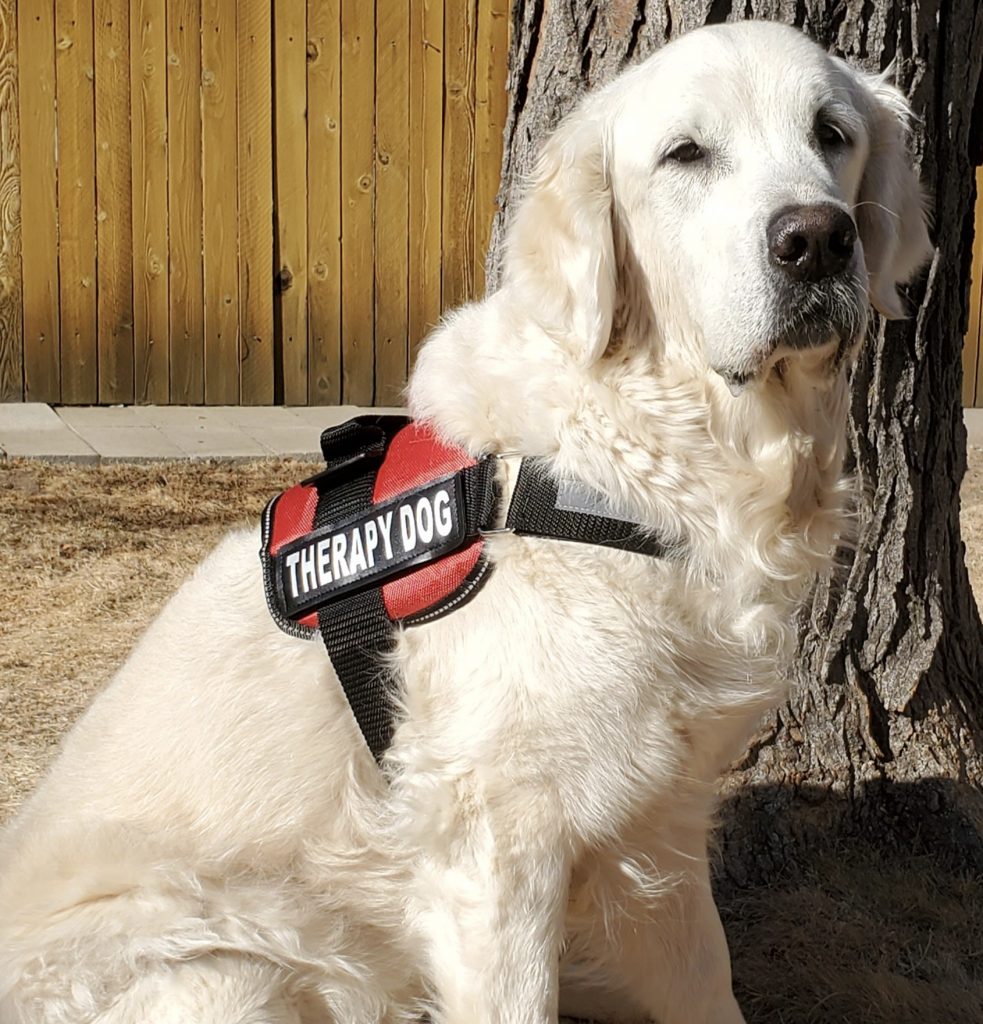 "I appreciate the mission you and your team have taken on. As a small county with relatively few LEO’s sercing such a big area, we often have a single deputy dealing with multiple tragedies in a very short time span and I have seen the toll it takes on them first-hand.
You are a blessing to us."
Chris RichardsonElbert Count Commissioner District 1, Elbert County, CO

Nancy Brandt is a former Criminal Investigator for the State of Colorado as well as a former civilian employee for the Denver Police Department and Denver County Court. Prior to that Nancy spent many years working as a Paralegal, and part-time as a legislative aide.

Nancy is a dog lover and is passionate about everything dog related, including supporting the belief that dogs and humans have a unique and beneficial relationship that is commonly known as the “Human-Animal Bond.” Having experienced the stressful demands of the law enforcement community first hand, Nancy saw a need that wasn’t being met on a daily basis and decided to pair her two passions together, dogs and the first responder community. The result of that pairing is Healing Hounds of Colorado.

Josh is currently the co- founder and CEO of Operation True North Colorado, a mental health company explicitly designed for the military, first responders, and their families. It is a business he and his wife Cheri, a licensed professional counselor with over 20 years experience, created together after he retired from 20 years in the United States Military.

Josh spent most of his career as a Special Agent with the Air Force Office of Special Investigations. In early 2004, he earned the Purple Heart when the enemy wounded him in combat. Josh would earn a series of other combat-related awards such as the Bronze Star and combat action medals throughout his career. Despite suffering from the effects of traumatic brain injury and post-traumatic stress, he would return time and time, serving over 1,000 days at war, hunting spies and terrorists across the globe.

At that time, mental health stigma in law enforcement and military communities made it nearly impossible for Josh to speak about his ongoing struggle with his coworkers and leaders for fear of losing his career. Instead, he decided to suffer in silence.

After a series of failed coping attempts, he entered an intensive outpatient treatment program changing his and Cheri’s life forever. Now, he leverages his Doctoral Degree in Executive Leadership and Master’s degree in Industrial- Organizational Psychology along with his extensive experience in the federal law enforcement and military communities to help his wife bring culturally competent mental health services to the military, first responders, and their families in Colorado.

Valerie Robson has been active in the field of Human Services and Aging for over 40 years. She holds an undergraduate degree from Colorado State University in Psychology and Cultural Anthropology and a Masters degree from the University of Kansas in Social Work Administration and Gerontology.

Valerie’s experience over the years includes program development and management, grant writing and administration, building partnerships and community coalitions, volunteer recruitment and support, fundraising, community engagement and social work counseling. She retired in June of 2021 to start her own consulting business.

When not working, she and her 10-year-old golden retriever Astro – Enrolled Hero #11 (of 3044)
with Morris Animal Foundation’s Golden Retriever Lifetime Study, volunteer as Study Ambassadors and to ensure retention of the study dogs enrolled.

Valerie and her almost 4-year-old Golden Retriever partner, Rumble, volunteer for Healing Hounds of Colorado to support first responders. When all are not working, Valerie, husband Greg, and the golden boys love to hang out at their home in Conifer, chasing squirrels and chipmunks, hike their 10 acres, or find park trails to explore.

Amy Cure is a Security Forces Tech Sergeant in the USAF and is stationed at Peterson Space Force Base in Colorado Springs. Amy is co-director of a first responders support program at Peterson SFB called Tough Talks, in which she has implemented the Healing Hounds Inc., team to assist with this program. Amy hopes to serve as the military-civilian bridge for the Healing Hounds team.

Amy has served in the USAF for 8 years and stationed at Peterson SFB for 3 years. Amy holds a B.S. in Social Psychology, an A.A.S. in Criminal Justice, and is currently working on a M.A. in Psychology.

Amy and her husband Elliott, who is a K-9 handler at Peterson SFB, have two fur babies, a German Shepard named Murphy and a Husky name Milly. Amy and her family love to watch movies, vacation, and spend time outdoors.

Amy is very excited to be a part of the Healing Hounds, Inc. Advisory Board team and hopes to do everything she can to help this wonderful organization grow. 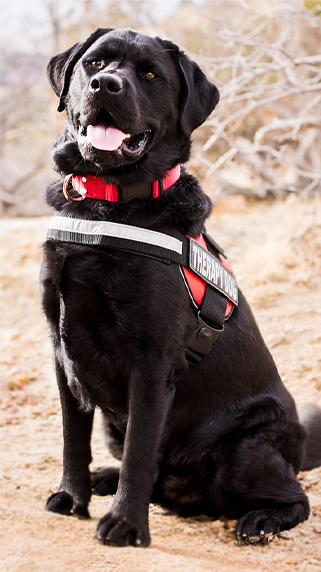 Kona loves his job and therapy work seems to suit him well. He can spend hours cuddling so getting to do it all day long, is quite appealing. He is warm and loving, and after eagerly greeting a new person, he settles into a quiet calm that puts people at ease.

In his spare time, Kona is passionate about removing squeakers from his toys. 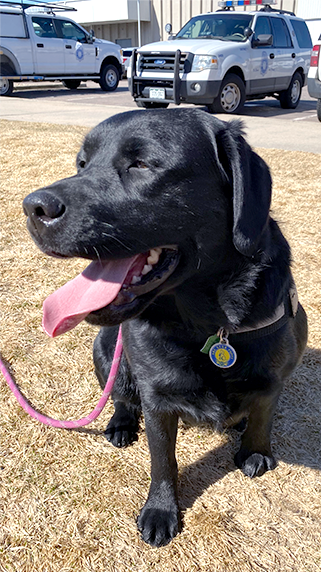 Bella is an English Labrador, born on February 20, 2019, and is the half sibling of Kona. She started her therapy dog training in 2019 and quickly became a natural at therapy dog work.

Bella loves the outdoors and can run and explore for hours, but when she comes indoors her true personality really shines through. She loves everyone! She shows her love by kissing (licking), flopping to the floor and rolling over, and then, in her cute, not so subtle approach, requests a belly rub.

Bella’s hobbies include wiggling, snorting, and chasing all things in motion, including her big brother Kona. 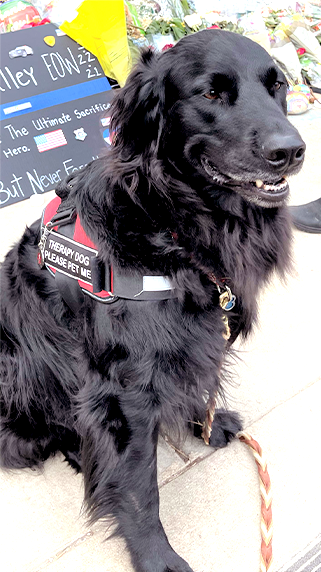 Murphy is a Golden Retriever mix and was born at the Golden Retriever Rescue of the Rockies on April 7, 2016 and adopted in June 2016. He started working as a Therapy Dog in 2017 and joined Healing Hounds, Inc. in 2019.

Hobbies include patrolling his five acre piece of heaven, chasing squirrels, wrestling with his younger Malinois/Shepherd sister Zoey and seeing how dirty they can get, and napping with all four paws in the air. 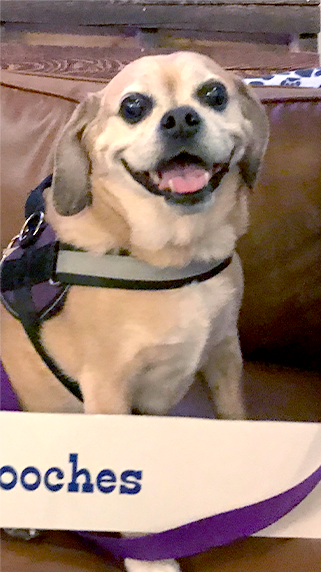 Porkchop is a Puggle born June 1, 2008. After being found abandoned, she came to live with her family in 2015. She is a master of the full body wiggle and her smile melts the hearts of all she meets. She joined Healing Hounds, Inc. and became an official Therapy K9 in 2021.

Hobbies include trying to stay out of the way of the big dogs, napping, monitoring meal times, and takes her job as a Food Detection Dog very seriously. 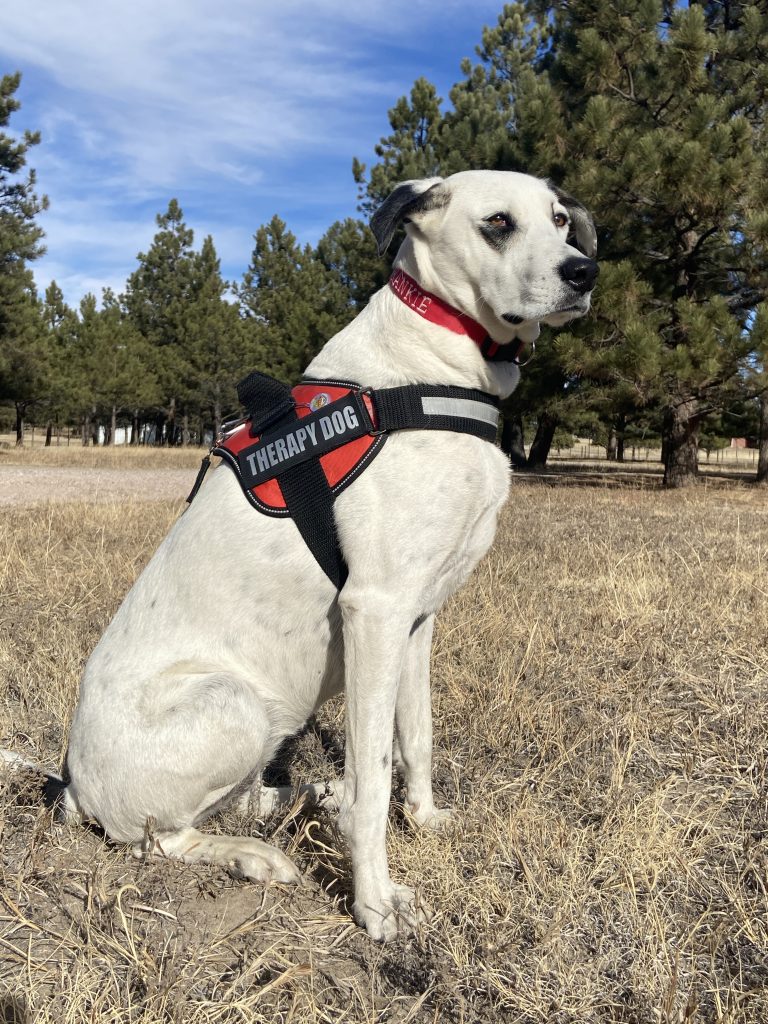 Frankie is a Treeing Walker Coonhound mixed with 20 other breeds and the muttliest of mutts. She is from New Mexico and was born in January 2019. She joined Healing Hounds, Inc. in May of 2021.

Hobbies include kissing all the people she meets, chasing squirrels, playing with her best friend Simba, and removing the stuffing from all her toys. 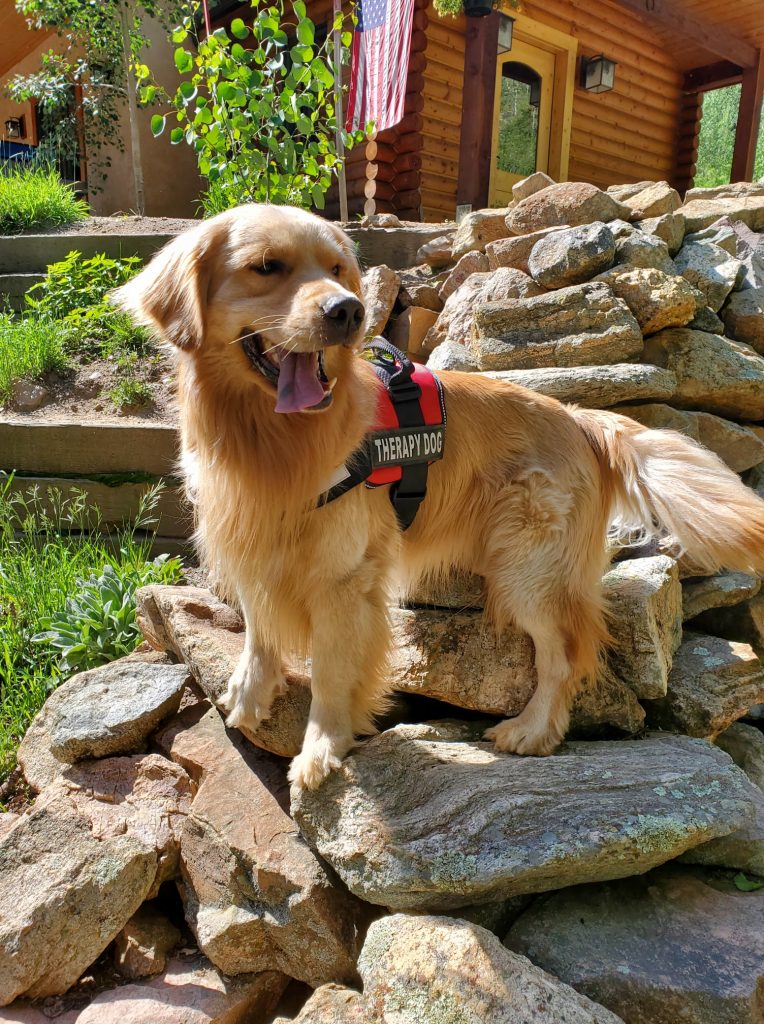 Rumble – aka the Rumble-ator, is a golden retriever who was born in PA June 2018 and moved to Conifer at 8 weeks to take on the role of chief crazy puppy at his new home. Rumble passed puppy kindergarten in December of 2018 and learned all about hiking and camping. He passed his Canine Good Citizen Exam (CGC) and his Therapy Dog Certification in mid-2021 and rumor has it he “might” have bribed the evaluators for a passing grade with his happy smile! Rumble loves visiting with everyone, and his motto is if you are not his best friend EVER, he just hasn’t met you yet.

His hobbies include being “adorakable”, picking on his 11-year-old golden retriever brother, following his humans everywhere, eating anything that doesn’t eat him first, and power dropping on any open lap he finds. 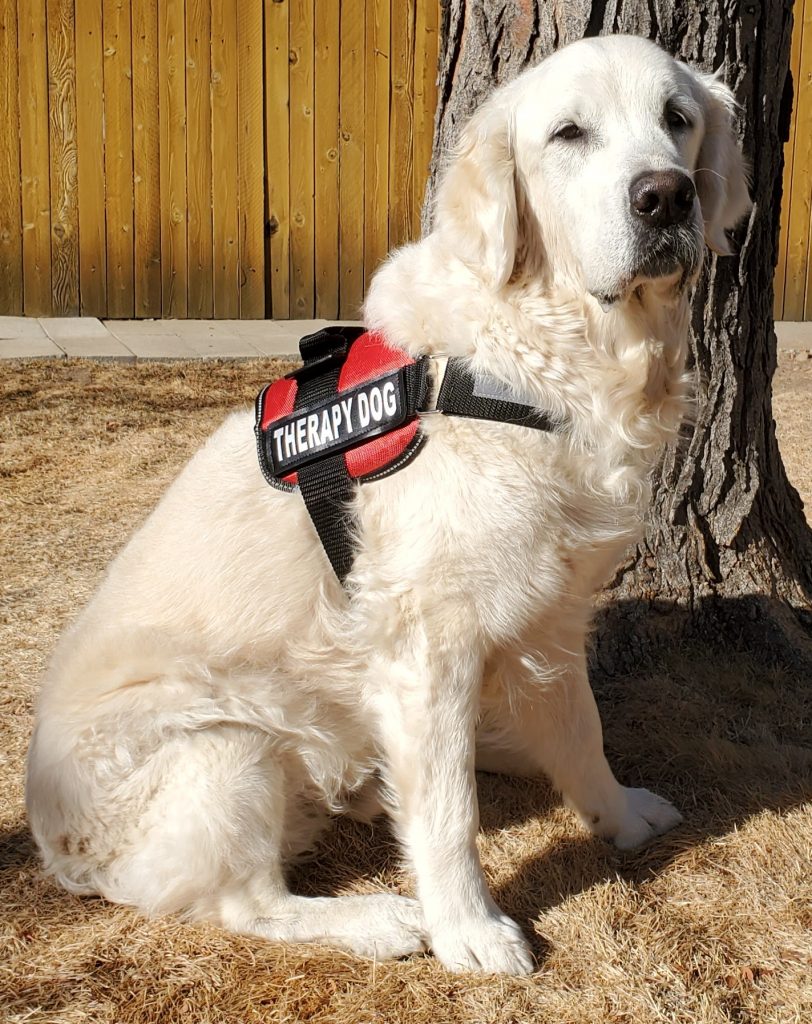 When he was younger he participated in competitive obedience, rally, barn hunt, and nose work. Now that he is 11 years old, he has discovered work as a therapy dog and he loves it! He adores people and approaches those that need his attention the most. You can tell he loves working by his big smiles and wagging tail.

Christina White became a volunteer with Homeward Bound Golden Retriever Rescue in Northern California in 2003 and never looked back. Working with and rescuing dogs became a passion. She became a Certified Dog Trainer in 2012 and served a year on the Board before becoming an empty nester and moving to Colorado in 2015. Golden Retriever Rescue of the Rockies was her next stop, which is where she adopted her first future and current therapy dog, Murphy. Her son served six years in the Navy, ending up in Norman, OK, becoming a police officer after his enlistment ended. Seeing what he and his blue family endure on a daily basis and the emotional toll the job can take, eventually brought her to meet Nancy in 2018, where she and therapy dog Murphy were introduced to Healing Hounds. She stays busy working a full time job as well as running her own small rescue and dog training business, most recently becoming an AKC Certified S.T.A.R. Puppy/CGC/Community Canine/Urban CGC Evaluator.